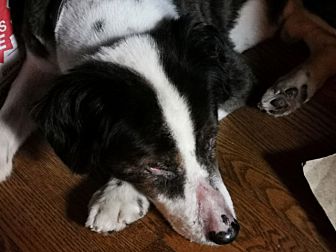 Good with Dogs
Housetrained
Shots Up to Date
Spayed/Neutered

Meet Tigger aka Little Guy, a 40#, knee high, at least 8 yr old, shades of brown & white/brindle Collie/hound mix. Tigger was found as a stray in southern Indiana and was sedated in order to shave off what appeared to be years of matted fur. After shaving, his coat was found to have spots and brindle tiger stripes, a complete change of look! Rover swooped in to bring him north and find this deserving boy a new family.

Sadly, Tigger's ordeal continued as during neuter surgery, the vet also completed a dental for him because "his teeth were just AWFUL" and that resulted in 11 of them being removed! Two weeks of only soft food has been completed and Tigger has improved considerably. His personality has gone from grumpy old man to almost puppy-like energy! The poor guy must have been in incredible amounts of pain for such a dramatic improvement in personality. Currently consider him medium energy with bursts of high.

His foster mom has observed the following:
He must have been raised in a house at one point because after initially marking in the house, he no longer does that. He knows SIT and automatically does this when any food is being prepared. Tigger leaps into bed at night when it's time to sleep and runs up/down stairs without difficulty. He rides well in a car (no throwing up) and while he doesn't howl along with his picky foster brother, Ajax, Tigger does bark when he wants attention or to go outside.

He really likes people and lets men & women pet him, flipping over for belly rubs.

Currently, he's being treated for hair loss around his eyes and the top of his nose. The scrape test was negative for mange, so this could be either a standard infection due to poor nutrition, care & bad teeth or a long-term immune disease called SLE. Tigger's fur is growing in and is as soft as a plush velvet Elvis painting. He hasn't yet been tested with children or cats. Tigger is currently getting along with Lady & Ajax, his larger foster sister & brother.

Tigger is up-to-date on vaccinations & microchipped and his adoption fee is $225. If you feel that Tigger would be a good addition to your family, please contact Margrit at 630.820.1584.